At nine p.m. on a Monday, clad in orange shirts, pro-choice protesters marched up the hill to the Capitol Building in Austin, heading directly towards their pro-life counterparts while singing “Come and take it!”  in a chorus that clashed with the singer-guitarist who was playing praise music on the north steps of the Capitol.  Former Arkansas Governor Mike Huckabee had delivered a rousing keynote speech just minutes before, but the pro-life crowd scattered as the oncoming army of orange advanced.  The blue shirt pro-life advocates grabbed their children and retreated from the approaching hordes of tattooed, dyed, and bleached pro-choicers, who bought a euphonium player to accompany their chants.

The pro-choice crowd wasn’t encumbered by children for the most part, and those few pro-choice women who had children pushed them up the hill in strollers.  Democracy in Texas is a sight to behold, a sea of blue and orange undulating back and forth, a cacophony of slogans and praise music rising into the nighttime sky in Austin.  Citizen participation in Texas is, like everything else in this state, bigger than it is anywhere else.  For the third time, the pro-choice and pro-life sides squared off in Austin, for Senate Bill 5 had become Senate Bill 1, and the Texas legislature was in a second special session.

The legislation had failed in the regular session, only to be resurrected in the first special session as Senate Bill 5 when State Senator Wendy Davis, standing in a pair of soon to be infamous pink Mizunos, stood for eleven hours as a raucous mob of women watched her attempt to filibuster the legislation.  Davis almost talked the bill to death, but at the eleventh hour, her mention of a 2011 bill involving sonograms and abortion led to Lt. Gov. David Dewhurst sustaining an objection to Davis’s off-topic remarks that ended the filibuster. 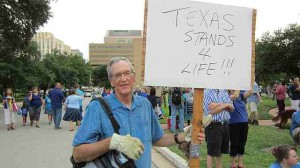 As Republicans huddled together to try to push the vote through before 12 a.m., pro-choice protesters roared in displeasure.  Democrats rushed to point out the time, and it was later revealed that the Republicans had retroactively dated the vote in the record. Dewhurst was forced to walk-back the vote, and Governor Rick Perry promised a second special session to force the Legislature back into session over the abortion bill and two other bills.

In the aftermath of Davis’s filibuster, Mizuno’s online branding shot up 375%. Wendy Davis was the darling of the progressive left, and the her pink Mizunos were the Air Jordans of abortion.  The stage was set for yet another showdown over abortion in Texas, with each side determined to outlast the other.  On Monday, both sides converged on Austin for the latest showdown over legislation that would require abortion clinics to adhere to the same standards as ambulatory surgery centers, while also banning abortions after 20 weeks.

The hearings followed the revelation that Governor Rick Perry would not seek re-election, which prompted wide speculation over the possibility of a presidential run in 2016.  It also put SB 1 in context: should SB 1 pass, this would be one of the final accomplishments of Rick Perry’s tenure as governor.  Perry has left an indelible impression on Texas state government as the only governor in the modern era to have appointed at least one person to every eligible state office, board, or commission. Six of the nine current members of the Texas Supreme Court are Perry appointees.  Perry’s career in Texas politics stretches over three decades, and SB 1’s passage would be a signature achievement to bolster any future presidential run with the Republican base.

SB 1’s defeat would be a defining achievement for a Democratic Party that hasn’t won a statewide office in Texas since 1994.  Indeed, in pushing for a third attempt at passing the legislation, Rick Perry may have revitalized the Democratic base in a way the state Democrats could never have accomplished on their own.  Perry, Dewhurst, and the Republican majority in the statehouse are locked in a battle with Democrats that will be defining for both sides regardless of the outcome. 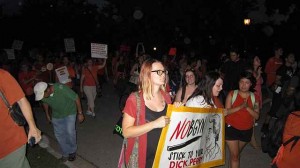 A Democratic Party that was for all intents and purposes consigned to the fringes of Texas politics has suddenly found some fight within itself, even if the passage of SB 1 has taken on an air of inevitability.  Texas was ground zero in the battle over abortion in 1973, when Roe v. Wade overturned Articles 1191-1994 and 1196 of the Texas Penal Code.  Forty years later, Texas is again the front line in the battle over abortion.

For Rick Perry, SB 1 will define his legacy with Republican pro-life voters, but it will also define him in any presidential election with independents.  For those who stood on the Capitol grounds on Monday night around 9 p.m., the sheer force of the pro-choice side’s conviction stood out.  While the pro-life advocates were loud before Huckabee’s keynote speech, the pro-choice side managed to walk right into the middle of the pro-life rally and thunderously shout down a praise musician with a public address system amplifying his message.

In late June, many of those same protesters were standing inside of the Capitol Building, shouting down the Republicans as they rushed to pass the bill on time.  They successfully managed to delay the bill’s passage, and they are en mass yet again.  Many of the protesters have been at the Capitol for every hearing, every vote, and every development relating to the legislation.

Nearly every protester on either side of the debate over SB 1 seemed to possess a deep sense of the futility of attempting to win the other side over, even though they acknowledged common ground.  Jamie Atkinson, clad in an orange shirt with a sign that read “Dear TX Repubs, Please Keep Your “Small” Government Out of My Vagina,” spoke about contraception as a means of preventing abortion.  She also presented abortion as a way of saving a life, specifically her mother’s.  Atkinson said that her mother had undergone a difficult pregnancy when doctors found that her unborn child had Down’s Syndrome.  With her life at risk, her mother chose to abort the child.

For Atkinson, her family wouldn’t have been possible without a medically necessary abortion because her mother could have died as a result of her pregnancy.  Still, Atkinson did not seem to favor wider availability of abortions, or loosened restrictions.  She, like many other protestors at the rally, pointed to contraception as a means of preventing abortion.

Many of the protesters wore screen printed t-shirts that read “Come and Take It” with a uterus and fallopian tubes in the place of the typical cannon barrel.   One such protester was Charlie, a young gay woman who outlined her opposition to the bill with a particular twist: while she was pro-choice, she would have supported the bill if it had contained an exception for incest victims beyond 20 weeks.

Among the gay and lesbian protesters at the rally, a common theme was corrective rape, which consists of a straight individual raping a gay individual in order to make them straight.  The auditorium of pro-choice protesters erupted into cheers when a lesbian witness testifying before the Senate Committee outlined her concerns over corrective rape, followed by acidic remarks on the Texas Senate’s desire to extend rights to fetuses while simultaneously denying anti-discrimination measures to the lesbian, gay, bisexual and transgender communities of Texas.

On the pro-life side, individuals like Dale and Mary Lenay of Lufkin, Texas pointed to their understanding of Scripture as the basis for their avowedly pro-life stance.  Younger protesters wore shirts that read Adoption > Abortion, and tended to connect their deeply pro-life viewpoint to their faith as well.

Despite the obviously polarized viewpoints, most of the interactions between the sides were civil early in the afternoon.  There were occasional breaches of civility, such as the passing pro-life protester who shouted out “Stand for Life!” during an interview being given by a pro-choice protester who was outlining her objections to the legislation and the religious undertones thereof.

When darkness fell over the Capitol, and the pro-choice protesters rounded out their march route, the pro-life protesters turned to see them approaching the North Side of the Capitol Building, walking past the cannon and singing out “Come and take it!” Inside, the Republican controlled Senate waited for the hundreds of witnesses to complete their two minutes of testimony apiece, so that they could in fact go and take it.

The robust and passionate debate that spilled out onto the Capitol grounds was a mere formality, a procedural requirement of Texas’s legislative process that exposed the deep rift between both sides of the abortion debate.  Texas is one state composed of two sharply divided camps on the issue of abortion.  While both sides acknowledged common interests in reducing the frequency of abortion, they disagreed completely on the issue of how accessible abortion should be and how involved the state should be in regulating abortion.

Nowhere was this division more apparent than in the long line of individuals signing up as witnesses before the Senate’s Committee on Health and Human Services.  The line snaked around the corner of the Senate’s entrance, down the hallway of the E1 level, and down the stairwell to the E2 level, winding around the wall and ending hundreds of feet from where the line began.  Simply walking the length of the line took several minutes, because hundreds of Texans on both sides of the issue were waiting for their two minutes.

Those two minutes stretched into hours, as people on both sides of the issue told their stories about experiences with abortion.  Most of the pro-life crowd hovered outside on the steps or in front of the Capitol, listening to speakers and milling about with their signs.  Inside, the opponents of SB 1 sat in auditoriums watching the live stream of the testimony, and waiting for their eight o’clock march.

That’s what this week will be, more than anything else in the state of Texas: waiting. Can Perry and the Republicans manage to pass SB 1, or will the sheer volume of witnesses and the determination of state Democrats obstruct and thwart a Republican majority’s will yet again?  Perry has vowed to pass the bill within the next ten days, and many of the opponents of the bill have vowed to be in the Capitol each one of those days.  An epic battle that holds implications for the rest of the nation is unfolding in Texas, and history is about to made.

The Long View: Texas, Wisconsin, and the Game of Inches

Doctorow, How to Destroy the Book