Chicago, March 28, 2013 – One week after the ten-year anniversary of the Iraq War and twelve years into Afghanistan, neoconservatism yet remains the dominant foreign policy influence within the GOP.  With its embrace of big government and unlimited spending on interventionism, neoconservatism has to a substantial degree, taken the GOP away from the Republican Party’s roots in conservatism and back towards its own Trotskyite utopianism. It remains to be seen whether there is anything other than the public’s aversion to more foreign policy quagmires, budget busting debt, or defeat in national elections that will make the GOP self-correct its foreign policy.

Neoconservatism is a loosely defined ideology, which in its most consistently expressed terms as it relates to foreign policy holds that democracy should be spread to all parts of the world and that doing so will result in peace. It advocates global military intervention and unilateralism over diplomacy and statecraft. The theory being that western democratic and capitalist states are peaceable. This works when you think of Canada or Australia, but from a longer historical perspective, this belief is unsupported by any depth of historical evidence. Historical proof is not necessary however as the enthusiasm for ideologies are rooted in faith – in the case of Neoconservatism, it is a belief that commitment to world-wide revolutionary change that will bring peace, can only be achieved by the spreading of that democracy to all nations even if by global intervention. This is precisely what the Communists tried to achieve in spreading Communism across the globe until they were fiscally exhausted and ideologically isolated. They shared the same belief in a revolutionary ideology.

The problem with Neoconservatism, like other utopian ideologies, such as Communism, is that they are counterfactual. In assuming an end state of blissful peace among men everywhere, you pretty much have to discount all of recorded human history. Peace is not the norm in human history – it is the exception. We have always had wars.

The Cold War was also the Great Peace but it was, at least from a historical perspective, an aberration. In terms of the sheer number of conflicts and wars, we have many more conflicts and wars now than during the Cold War. The United States won the Cold War using strategies of containment and deterrence articulated by George F. Kennan. Neoconservatism largely ignores the lessons of the Cold War, along with much of history, human nature, and the cultural and religious differences among people, in favor of an almost childlike belief and enthusiasm for peace through democracy-at virtually any cost. Neoconservatives focus on Poland and the democratization of Central and Eastern Europe more than the point of the Cold War-the great battle between the world’s two superpowers.

Not wanting to intervene to spread democracy is somehow equated in the neocon ideology with isolationalism or pacifism. This is completely false. If your quest is to “make the world safe for democracy” if even by ceaseless war, even a pit stop in the form of a question, will look like isolationism.

Another problem with neoconservatism is that criticizing it is not just politically treacherous, it is altogether unacceptable. The Left curtailed the free exercise of speech with political correctness. For the Right, to criticize neoconservatism may lead to being branded with the awful slur of “anti-Semitic.” This label stops discourse in its tracks and intimidates any and all who would come close to criticizing neoconservatism. This is unfortunate, because although the founders of neoconservatism were Jewish, and many of the most prominent neocons are Jewish, there are plenty of reasons to criticize neocons on the merits of their arguments-even if they were Vulcan or Lilliputian. But the threat of being slandered as an anti-Semite is a very effective and intimidating one. None of this fosters a more critical or open examination of foreign policy debate. Just ask Chuck Hagel whose label of anti-Semitism was earned simply by saying, “The Jewish lobby intimidates a lot of people up here. I’m a United States senator. I’m not an Israeli senator.”

There was a time the Republican Party embraced Realism, as recently as with George Shultz, James  Baker, Brent Scowcroft and H.W. Bush, even though they spoke 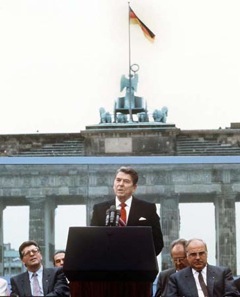 idealistically. Ronald Reagan spoke in very idealistic terms but only engaged in three short and limited military interventions in his eight years; Grenada, Libya and Lebanon. He was no proponent of quixotic nation building. On the contrary, Reagan avoided direct military engagement with Russia and was roundly criticized by Neoconservatives for not being aggressive enough or trying to make the Soviet Union disintegrate from within. Now, Neoconservatives forget their criticisms of Reagan and try to claim him as one of their own-he was not.

George F. Kennan expressed Hans Morgenthau’s concept of political realism and made it his own. Realism is based on the idea that nation states seek power and act in their own interests. By contrast, Neoconservatism does not urge intervention based on actual geopolitical or strategic interests but on ideals and principles. Often the litmus test for intervention is “is this good or bad for Israel?”

To neoconservatism, Islam and all Islamic countries are a sort of monolithic, existential threat-their existence the enemy of the idealized democratic world they would like to liberate. But then again, every state that utters less than friendly utterances to the United States or Israel is seen as a new Soviet Union in gossamer but no less lethal incarnation. Every loose talker is a deadly menace.

The Iraq War was the first test case. While one of principal reasons for the Iraq War was the alleged existence of weapons of mass destruction, though none were ever found to exist, the deeper neocon goal was the Freedom Agenda to liberate the Iraqi people and give them democracy.

Admittedly, Saddam Hussein was no one’s idea of a benevolent dictator. His use of poisonous gas on the Kurds was brutal and reprehensible. All of this was taken together to argue that he was also irrational and being possessed of WMDs, would use them unless stopped. The reality was that in the 30 years that Saddam ruled, he invaded another country once-Kuwait. This did not make him irrational or uncontainable. In the nuclear age, there has never yet proven their self to be an irrational actor.

Yet the neocons and a press ignorant of history somehow managed to even draw comparisons to Hitler- this is extremely poor history. The neocons pushed for war on the argument that Hussein could not be contained. In point of fact, there was no evidence to suggest that our ability to contain him was any less than it had been. The use of poisonous gas with the Kurds reprehensible but done because they could not retaliate. Saddam could have used poisonous gas on American forces in first Gulf War but he did not. Why? He did not want to be obliterated-he was deterred and not the crazy irrational actor with a suicide wish for his entire country that the neocons said he was. He had, all brutality aside, provided an effective counterbalance in the region to Iran.

What is next for the neocons is to bring about war against Iran and Syria. The neocons have had their sites on Iran for over a decade. The rationale for war is that posturing and calling for the annihilation of Israel on Ahmadinejad’s makes him an irrational actor. Despite the bluster, there is no rational reason to believe he has a death wish for his country and every living thing in it-in other words. As the Realists and Kennan rightfully believed, there has not ever been an irrational nuclear actor. Also, Iran is not a nuclear actor-there has been a fatwa issued by the Supreme Leader of Iran, against it ever being one. Israel has between 200-300 nuclear weapons of varying capability with many ways to disperse them-Israel can annihilate the entire Middle East at once, and several times over-in other words it is fully able to deter anyone were there anyone capable of attacking it in the first instance or anyone even remotely comparably armed-even if Iran were able to get a nuclear weapon. And lastly, Ahmadinejad is at the end of his term and unable to run again. Despite all his loose talk, he is not the decision maker in Iran-the power lies with Khamenei.

In order to accelerate a war with Iran, Senator Robert Menendez and Lindsay Graham are seeking signatures on Joint Senate Resolution, SR-65 which would outsource the decision of when America should go to war with Iran to Prime Minister Benjamin Netanyahu.[4] This resolution originated with AIPAC and constitutes a radical abdication of Congress’ and the President’s war powers.

One would think that ten years after Iraq with an ultimate cost in excess of $6 trillion dollars, on top of the thousands of American lives lost, the tens of thousands injured and many more suffering from PTSD, along with the tens of thousands of civilian deaths, the GOP would reconsider its fatal attraction to neoconservatism. It is just not so. Something has to give or we are heading to a state of perpetual occupation and endless wars, regional instabilities the equal of which we have never seen and of course, fiscal exhaustion.

Mommy, Do You Love America?