Yesterday Rand Paul took unilateral control of the Senate and you know what he spent his time talking about? Drones and due process. Did you know that Obama and Holder think they have the right to kill Americans, on American soil, without consulting anyone? Yesterday the anti-establishment coalition in the Senate exposed that.

Now there are a lot of bitter voices out there. For the next few days they are going to be saying things like

“Where were all these guys defending our rights when Bush started the drone program” and “this is just people being paranoid.”

Ask yourself this question. Are you more interested in participating in this kind of petty bickering and tireless cat calling or would you rather participate in making our country a place where the government can’t arbitrarily change the definition of what our natural rights are?

A lot of people have been trying to warn you that something stinks with the government.

Think about the trillions we spent to “improve our infrastructure”, where is that money?

Think of the all the money we spent to “fix” the housing market, how is your neighborhood doing after the trillions spent?

Think of your privacy and ask whether you want the government building databases with all your medical and personal data?

Think of what you can be arrested for and then consider that the government now openly admits that they don’t arrest bankers.

If you’re more than just a hack you might want to pay attention to what people like Rand Paul, Ted Cruz, and Mike Lee are trying to tell you. 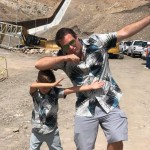