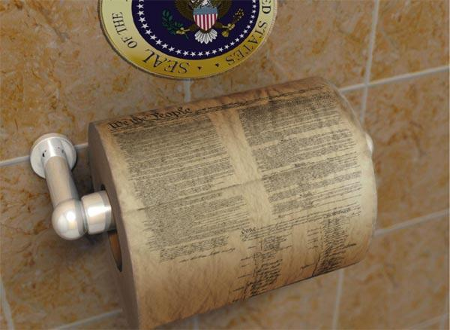 Welcome to a new featured series here on Liberty Pulse, The Constitution is Toilet Paper.  Each week, we’ll be reviewing all of the ways in which our government uses the United States Constitution as toilet tissue, as opposed to the blueprint for limited government it’s supposed to be.  Make no mistake about, the United States government at all levels doesn’t respect limitations on its power.  Be it local, state, or federal government agencies or bureaucracies, the U.S. government spends most of its time and energy evolving new ways to disrespect the Constitution and trample your liberties.  You can replace the 535 men and women who make up Congress, or the two elected officials who hold power at the White House, but you will not be able to touch the entrenched bureaucracy in Washington D.C., various statehouses, and City Halls around the country.

And what a bureaucracy it is! It spawns ever greater amounts of regulation; it thinks up new and ever more creative ways to tax everything, and it never has enough money or power.  This week’s edition deals with one of the most corrupt agencies to ever exist at the federal level: the Drug Enforcement Administration, or the DEA.  The DEA is tasked with prosecuting the War on Drugs, but its agents have a curious tendency to turn up working in the drug trade.  With 87 offices in 63 countries, the DEA has made itself useful to various regimes across the globe, and those regimes have in turn infiltrated the DEA’s operations, so much so that Venezuelan intelligence managed to intercept U.S. embassy emails due to compromised security at the DEA’s office.

The DEA’s most recent issues concern a division, the Special Operations Division (SOD), comprised of members from two dozen partner agencies such as the FBI, CIA, NSA, IRS, and DHS.  The NSA’s foreign intercepts are passed on to the SOD, which in turn passes on the tips from the NSA to domestic law enforcement agencies.  The SOD also maintains a massive database, the DICE, that contains 1 billion records from subpoenas, arrests, and search warrants.  1o,00o federal, state, and local law enforcement agencies have access to the DICE database.

While NSA’s intercepts ostensibly target terrorist efforts, the intercepts that pick up criminal activity are in turn passed on to state and local law enforcement by SOD. There’s only one problem: the DEA hides the origin of the intelligence, thereby depriving defendants and their counsels of discovery information.  Those defendants have no way to know who their accusers are, or whether or not the inculpatory information originates from constitutional searches and seizures.

Moreover, they have no way of cross-examining the sources of the tips, or challenging the veracity of the selectively excerpted information passed on by the DEA to prosecutors.  As Ezekiel Edwards, the director of the American Civil Liberties Union’s Criminal Law Reform Project puts it:

“When someone is accused of a crime, the Constitution guarantees the right to examine the government’s evidence, including its sources, and confront the witnesses against them. Our due process rights are at risk when our federal government hides and distorts the sources of evidence used as the basis for arrests and prosecutions.”

Of course, the DEA has briefed Congress over the SOD, and Congress hasn’t seen fit to do anything to stop or reform the SOD’s unconstitutional breach of procedures designed to afford defendants due process and a fair trial.  The DEA has engaged in a “recreation” of the investigations to hide SOD’s role in generating tips for prosecutors and law enforcement, which begs the question: if it’s legal, and the tip only concerns a drug dealer, why does the DEA feel the need to hide it?  It’s not national security; the only tips passed on to prosecutors concern ordinary criminals violating U.S. drug laws.

The lack of transparency isn’t at all unusual; in fact, under President Obama, DEA rejections of Freedom of Information requests has more than doubled.  The type of rejection is also significant: DEA rejections of FOIA requests for 7e exemptions went up 620% between 2010 and 2011. What do 7e exemptions concern? Oh, just raids, wiretaps, confidential informants, straw buys, tracking devices, and other areas.

It’s just another day in the existence of the most transparent presidential administration in U.S. history.  The Obama Administration, campaigning as it did on Hope and Change, has given us change in terms of building upon constitutional abuses under the Bush Administration.  The Constitution continues to be toilet paper, only it can’t possibly wipe up the mess of yet another President with zero regard for limitations upon his power or the power of his subordinates in the federal bureaucracy.

A Fork in the Revolution