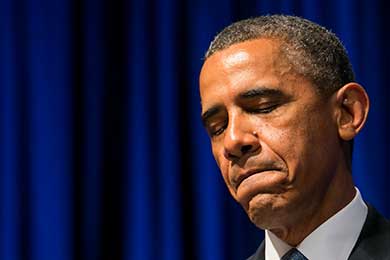 TAMPA, July 26, 2013 – Plagued by ongoing scandals and perhaps regretting an ill-advised speech on the Zimmerman murder case, President Obama attempted on Wednesday to shift the focus to the economy. There’s only one problem. The news is all bad there, too.

The president continued attempting to blame the Bush administration, but it’s doubtful anyone besides his diehard supporters was buying it. It’s been over four years now. If what the president does actually affects economic conditions, this is Obama’s economy and it’s in shambles.

There is not much reason to believe that the president is going to help, either. His speech was remarkable for only one reason: the extent to which it illustrated how out of touch with reality he is.

For the president, the economy is suffering from a dearth of government intervention. Citing a growing middle class as the “engine of our prosperity” after WWII, Obama then lamented,

“But over time that engine began to stall, and a lot of folks here saw it. That bargain began to fray. Technology made some jobs obsolete. Global competition sends a lot of jobs overseas. It became harder for unions to fight for the middle class. Washington doled out bigger tax cuts to the very wealthy and smaller minimum wage increases for the working poor.”

Some securities traders use the expression “on tilt” to describe a trader that is doing everything 100% wrong. Often, it is the result of “being on the wrong side” of a big trade or several big trades. While attempting to recoup his losses from the previous mistakes, the trader makes even worse decisions.

The president is on tilt. His perception is a perfect negative of reality. If anything, legislators should listen to what he’s saying and do exactly the opposite.

If unemployment were measured today the same way it was in the 1930s, the numbers would be virtually identical. Unemployment is worst for young people and minorities, the very people who are priced out of the market by minimum wages. The president says that minimum wages aren’t high enough. He’d put even more young people out of work.

He cites manufacturing going overseas as a cause of economic malaise. It’s not. It’s an effect, caused by artificially inflated labor prices. That’s not a result of the natural market price that would occur if labor unions simply negotiated prices with employers. It’s the result of the Wagner Act adding force to the equation and destroying the equilibrium that results from both parties acting voluntarily.

As far as “tax cuts” are concerned, this is old ground. The only debate at this point is over whether the top rate should be 35% or 39%. Rates higher than 39% have been tried and they bring in less revenue. The additional 4% isn’t going to save the economy. It might make some people feel better, but the math just doesn’t work.

The president’s solutions are just as wrong. He repeats the Keynesian mantra that the government should put people to work, citing the need for “infrastructure” that big government enthusiasts have been pushing since Alexander Hamilton. This at a time when the government is almost $17 trillion in debt and has tens or hundreds of trillions in unfunded liabilities, depending upon whose accounting you use.

Government make work has been tried decade after decade and hasn’t worked. When will repeating the same procedure and expecting a different result be recognized for the insanity that it is?

Politicians like Bush and Obama often talk about acting “boldly,” which for them usually means destroying longstanding limits on the power of the government. Here are some suggestions for the economy that would truly be bold:

Give the minimum wage a one year vacation. There is a job for every able-bodied person at some price. Why not see what would happen if the idle ¼ of the workforce (using real numbers) actually did some productive work? Most of them want to, but are not allowed to accept a job that pays what an employer can afford for their skills. Politicians and the politically connected would scream, but I’m not so sure that the newly employed would want to give up their jobs when the year was up.

As far as those bridges that are “old enough to be on social security,” borrowing more money so that the government can never fix them isn’t the answer. Here’s a bold suggestion: sell all government-owned roads and bridges. Each applicable government (federal, state or local) can apply the proceeds to the principal on its crippling debt. The “infrastructure problems” will magically vanish when private owners have an incentive to do repairs. Does anyone truly believe that it would take years to repair a short stretch of road if a private owner were losing money for every day it was not operating at full capacity?

The one thing legislators are doing right is dragging their feet on implementing Obamacare, regardless of the reasons they’re doing it. They should continue.

As for the president’s suggestions, do exactly the opposite of what he says.

The Deal with Jack Hunter: The Republican mess