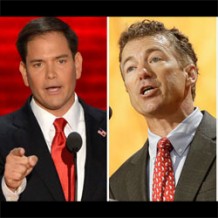 Sens. Marco Rubio and Rand Paul — in what could be a preview of a 2016 Republican presidential primary showdown — are staking out markedly different positions on U.S. intervention in the world, and particularly on American policy toward the Middle East

Kentucky’s Mr. Paul, who visited Israel and Jordan in January, is calling for Republicans to adopt a more restrained and less interventionist approach to global affairs, and is embracing the sequester cuts to the defense budget that is sending military hawks into a tizzy.

Mr. Rubio, who visited Israel and Jordan last month, is advocating a more muscular brand of global leadership and observers said it is significant that the Florida lawmaker tapped Jamie Fly, an adviser to President George W. Bush, as a counselor on foreign affairs and national security.