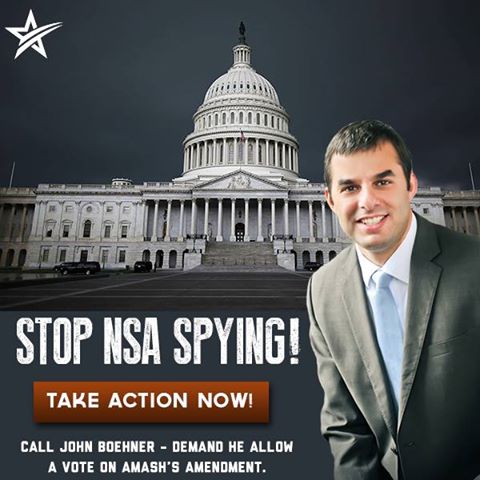 Every libertarian and blogger’s favorite Senator, Lindsey Graham, is back with another memorable tweet that should be chronicled the annals of his greatest misses.  Graham, who isn’t sure bloggers have First Amendment protection, and who thinks free speech is a great idea, except that we’re in a war and you can’t have free speech in war, tweeted the following about the Amash Amendment:

Good read in today’s WSJ Editorial about problems with the Smith-Amash NDAA Amendment in the House of Reps. http://t.co/4dbSTQNz

The Wall Street Journal, standing as it does for unrestrained liberty for big banks, takes issue with the Tea Party Terror Flakeout (that’s the actual title of the editorial), arguing that it gives political cover to the ACLU.  Well, it also stands for a reinvigorated and meaningful Fourth Amendment limitation on government power.  The Journal, and its sycophant Senator Lindsey Graham, seek to undermine any notion that the NSA’s spying was illegal, unconstitutional, or unnecessary.  No, no, no…our Founders would have chosen security over liberty, which is why they didn’t revolt against the Crown…oh, wait.

Graham and the modern mainstream media would have likely had a field day with Patrick Henry’s Give Me Liberty or Give Me Death speech, but today they get to characterize Justin Amash and his supporters as a bunch of flakeouts for opposing the surveillance of law-abiding Americans and their communications.  What a crazy idea, they say, this notion that if you haven’t behaved suspiciously or given the government probable cause, you should be exempt from the prying eyes of NSA contractors and bureaucrats.  No, the mere fact that you assert your Fourth Amendment right is in itself cause for suspicion.  People who talk about free speech, and gun rights, and unreasonable search and seizure are just a bunch of wacko birds.  No, your liberties must exist under restraint for the country to endure; the liberties of banks and hedge funds must be unrestricted in order to enable them to work the magic of the marketplace in making trillions of dollars disappear through lost capitalization and bailouts! All of this is necessary for our security and well-being as a nation!

Such is the way of Big Government Noise Machine and its favorite elected booster, Senator Lindsey Graham, who just loves Justin Amash.

What is the Export-Import Bank of the US and why is it so powerful?