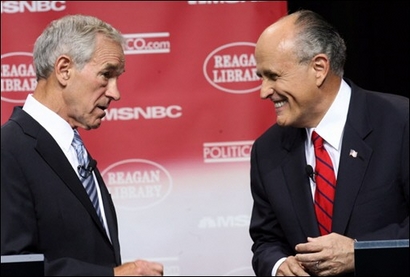 On September 14, 2001, Ron Paul took to the House floor and offered a summary of the American position that, over a decade later, has proven to be almost prophetic. He stated that “for the critics of our policy of interventionism in the affairs of others, the attack on New York and Washington was not a surprise. Many have warned of its inevitability.”

He continued by warning that “for us to pursue a war against our enemies, its crucial to understand why we were attacked,” for “without this knowledge, striking out at six or eight, or even ten different countries could well expand this war of which we wanted no part.” Those words should give pause to a nation that has spent the last decade mired in Iraq, after having disposed of a dictator who posed no threat to the United States, and who acted as a buffer against Shiite Iran. Iraq is a majority Shiite nation that had been led by a Sunni leader. Today, it is a majority Shiite nation with a Shiite leadership that, not surprisingly, is friendly with our newest enemies, the Shiite Iranians. The death toll for US soldiers in Iraq beats the death toll for 9/11 by close to 1500 people. But that is nothing compared to the over 100,000 Iraqis who lost their lives as a result of the United States’ foreign policy.

Those words should give pause to a nation that has spent a decade in Afghanistan, and sacrificed 2000 brave members of our armed services there. Afghan President Hamid Karzai has tearfully pleaded with the US to stop killing civilian citizens of his beleaguered nation.
Those words should be meaningful to a nation that has been responsible for over 350 drone strikes in Pakistan, amounting to anywhere between 2000 and 3300 deaths. Of those, America estimates that as many as 884 of them were civilians, and 197 of them were children! These are the US’s numbers. Who wants to bet Pakistan has different numbers?

Those words should resonate with the nation that rid the world of Libyan dictator Muammar Gaddafi, an early supporter of the US in the “War on Terror,” so that he could be replaced by rogue elements that may have ties to Al Qaeda. By the way, we are on the verge of assisting Al Qaeda in removing the Alawite Shia leader of the largely Sunni nation of Syria. What a victory that will be for the American foreign policy, and for Al Qaeda leaders in Syria!

Those words should especially cause us to ask our leaders whether they really want to start a conflict either with Syria, or with Iran. The US and Israel have been saber-rattling with Iran’s democratically elected leader for years now. Zionist leaders in both nations have compared him repeatedly with Hitler. Neoconservatives have charged that the US needs to take military action before Iran obtains even the capability of building a nuclear weapon. Senator Lindsay Graham stated that Iran is looking at a “massive attack” that it “could not survive” if it continues its nuclear program (says a Senator from the only nation to ever use a nuclear weapon in combat). The US-led sanctions against Iran have had a crippling effect on Iran’s economy. That means that the people who are hurt the most by the US’s anti-Iranian policies are the innocent Iranians who wake up every day, and go to work in order to provide for their families – and those who, due to the US, do not have jobs, and are therefore unable to provide for their families.

But attempts at finding the root cause of terror are typically rebuffed as anti-American – as if the decision to acquire knowledge is the opposite of patriotic. When Ron Paul opined, during the 2008 Fox Republican Presidential Debates, that “they attack us because we’ve been over there,” and that we ought to “listen to the people who attacked us, and the reasons they did it,” Rudy Giuliani (whose foreign policy experience is likely limited to riding the New York subway on occasion) called it an “extraordinary statement,” and accused Paul of claiming that the US was “inviting the attack.”

The University of Chicago’s Project on Security and Terrorism has conducted studies suggesting that 95% of suicide terrorism, like 9/11, is in response to foreign occupation. It is not surprising, then, that since 9/11, and since the massive uptick in the US’s occupation of, and involvement in, the affairs of Middle Eastern and Muslim countries, there has been a correspondingly massive uptick in anti-American suicide attacks. The vast majority of suicide terrorists come from exactly those regions threatened by foreign troops. And if that’s true, then our increased involvement in Iraq, Iran, Afghanistan, Libya, Syria, Pakistan, Yemen, and other nations will have one predictable result: more blowback from these nations!

Ron Paul preemptively criticized a policy of getting involved in conflicts with anywhere between 6 and 10 nations, without having a grasp on why anyone would want to hurt innocent Americans. Over a decade later, and the US is involved in armed conflicts with a host of nations. We are creating generations of people who will likely hate the US, who would have had no reason to do so but for the pain we have caused them by our military incursions, including drones, and through our occupations. Paul stated that he could not claim to be shocked at the terrible destruction that took place on September 11, 2001. “Many have warned of [the attack’s] inevitability.” Are we creating an inevitable blowback as we speak? If so, we ought to change course. That sure is the right thing to do; but more importantly, it would make us safer. There’s nothing unpatriotic about a foreign policy that promotes peace and security for all Americans. And there’s nothing admirable about our current trajectory.

Sheriff has McCain in immigration jam