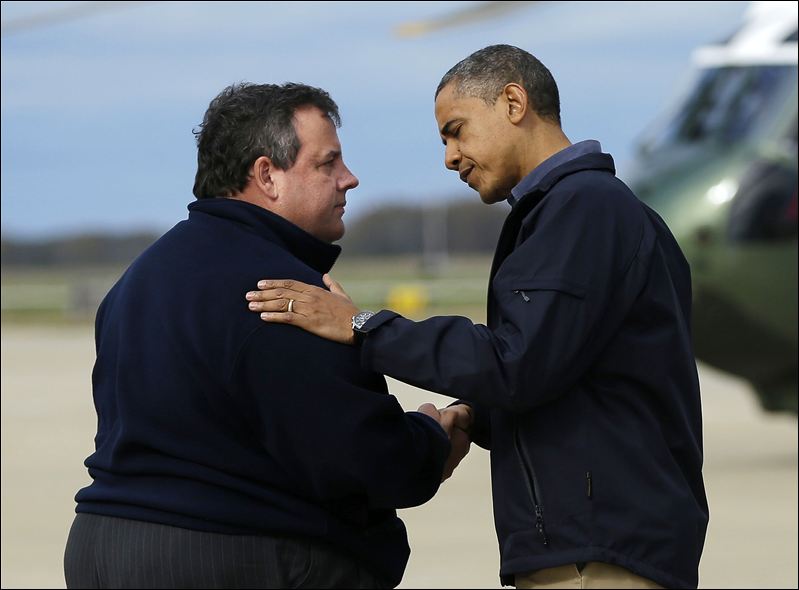 Just like Johnny Mac and Rudy G leading up to 2008 and His Mittness in 2012, the Republican Party establishment seems to have found their “next” man. Sure, they’d love to go with someone like Jeb Bush. An old Patrician Republican with a name they know…unfortunately for them, all of America knows his last name too. It looks like the “sane” wing (you know, the one that has lost the last 2 Presidential elections) of the GOP is rallying around Chris Christie.

Like many Conservative activists, when Christie ran for Governor in 2009, I supported Conservative Bogota Mayor Steve Lonegan in the Primary. Lonegan warned that Christie was a squish who would sell Conservatives out at the first opportunity. He was right.

Christie coy when asked if he’ll endorse Lonegan for Senate (via http://t.co/otJKW2xVrl) http://t.co/44TkshJMFz

At first, I liked the bombastic Christie. The Unions hated him, and that was a good sign. Then, Chris Christie realized he could be President if he played ball with the Establishment.

He turned down numerous overtures to run for President or VP in 2012. He MIGHT have helped pull Willard Romney over the finish line, but instead, the Governor didn’t want to risk losing his office (there are reports he was offered the VP slot but only if he would resign as New Jersey’s chief executive).

He gave a ho-hum speech to the RNC that was more about Chris Christie than about the Republican vision for America.

Finally, he thrust the dagger into the heart of Republican hopes to make President Obama a one-term President when he embraced his inner Charlie Crist and made Barack Obama his bff in the aftermath of Hurricane Sandy.

But, he’s the only hope of beating Hillary in 2016 according to the polls! How did that work out for Mitt Romney and John McCain?

Democrats and the media who pour their adoration on Christie now will eviscerate him the moment he clinches the GOP nomination for President. They always do.

Instead of a man who has advocated banning Barrett rifles from private ownership in his state, maybe we should nominate a man who filibustered to keep the Federal Government from using drones on private citizens?

…or maybe someone who is leading the fight to defund ObamaCare.

This September, we can #DefundObamacare, but the only way we’ll win is if America rises up & demands it: https://t.co/uils2UEPxW #DontFundIt

…or a Governor who essentially broke the public employee Unions in the cradle of their birth?

The next phase in Scott Walker’s war on unions http://t.co/Olfc5YEFzZ

We’ll get the nominee we deserve come 2016 and much will transpire but until then, I’ll be ordering my bacon, “extra Christie”.

Rand Paul slams Christie as ‘the king of bacon’ http://t.co/NG8oyPapmJ by @blakeneff

An interview with Tisha Casida, an Independent candidate for the U.S. House